Payments are accepted 24 hours a day when made online at www.allpaid.com

"Website Search" returns all documents and pages on this site relating to your search term. You may use more than one search term.
Examples: "Department One" or "Divorce with Children".
Do not use quotes in your search.

"Quick Case Search" returns cases that match the Case Number, and/or Case Caption, that you provide.
Partial and multiple values are acceptaple.
Example: Case Number = "CV" AND Case Caption = "Smith"
Do not use quotes in your search.


June 21st, 2019 - Judge Frances Doherty has announced she will retire on August 2, 2019 after 22 years of service to the Second Judicial District Court, Family Division.

"The Second Judicial District Court will miss Judge Doherty's commitment to people and her passion for judicial service. She has been a friend and mentor to me. I will miss her tremendously," stated Chief Judge Scott Freeman.

Judge Doherty is the longest serving Family Division judge, having been elected in 2002 and reelected in 2008 and 2014. During that time, she twice served as the Presiding Administrative Judge. "It has been an honor and privilege to serve in the Second Judicial District Court. I am proud of the work my colleagues and I have accomplished. We are a united and dedicated group of judicial officers who are committed to equal access to justice and earning and retaining the trust of the parties we serve. I am certain this dedication will continue after my retirement."

Judge Doherty has spoken and trained across Nevada and nationally on issues affecting children, families and vulnerable adults. In addition to family cases, from 2012 to 2018, Judge Doherty oversaw adult guardianship matters. During this time she worked to improve adult guardianship case processing and eliminate unnecessary guardianships. Judge Doherty successfully led a statewide initiative to implement Supported Decision-Making as an alternative to guardianship. In May 2019, Nevada became the ninth state in the nation to pass Supported Decision-Making legislation. Judge Doherty also oversaw Juvenile Delinquency matters from 2003 to 2012 and successfully implemented juvenile justice reforms including Juvenile Detention Alternatives Initiative, which reduced juvenile detention rates by 50%. Judge Doherty has been recognized for her work in various arenas.

Prior to her election, Judge Doherty served as a family court master, a legal services attorney and a Nevada Deputy Attorney General for the Nevada Commission on Ethics, the Consumer Protection Division and the Nevada Domestic Violence Task Force.

June 20th, 2019 - Chief Judge Scott Freeman and Presiding Judge Frances Doherty celebrate the signing of AB43 which provides a new judge for the Family Division. Thank you to Governor Sisolak and the Nevada Legislature for recognizing this important need.

May 28th, 2019 - The SJDC partners with IBM to build INSPIRES, a juvenile justice data sharing and predictive analytics program.

May 13th, 2019 - Judge Cynthia Lu is one of the national experts to serve on a multi-disciplinary panel regarding Assisted Outpatient Treatment (AOT).

Judge Cynthia Lu is one of the national experts to serve on a multi-disciplinary panel regarding Assisted Outpatient Treatment (AOT).

The shared expertise and information will be used to develop a learning curriculum focused on evidence-based principles of AOT.

This project is an initiative of the Substance Abuse and Mental Health Services Administration, American Psychological Association and Treatment Advocacy Center.

The opinion column below was written by Mike Antonucci, a court appointed special advocate in Washoe County for children in foster care.

A few good men can make an extraordinary difference. This is about the search for many such men.

The Washoe CASA Program is a volunteer-driven effort of Court Appointed Special Advocates dedicated to one-on-one advocacy for children in foster care. The circumstances of some of these cases, which originated with children suffering neglect or abuse, call powerfully for the presence and perspective of male volunteers. But the percentage of men among trained advocates is distressingly small.

The deterrents may start with a basic gender gap in awareness about the program. Even so, the men who do become CASA volunteers thrive as advocates for children who may have no other consistently supportive adult in their lives. And the sense of benefit is a two-way street: The kids tend to make much better transitions in and out of foster care, and their CASAs experience a remarkable sense of fulfillment in service to a child's future.

Establishing that unique connection is the essence of each volunteer's role in a complex and emotionally fragile process. The training from the program's case managers provides the grounding for representing the child's best interests at every court hearing. The course of an assignment - assessing and addressing a child's evolving needs - can take many turns. Some cases beg and cry for a stable and trustworthy male figure who otherwise has been minimally existent in the child's history.

One male volunteer describes arriving at a foster home for the first time and noticing the little boy inside at the window. The boy's reaction to realizing his CASA was a man? "It's a boy, it's a boy," he yelled excitedly to his foster mom.

Getting CASA volunteers in general is a major quest, but there are continual reminders of the need, such as Child Abuse Awareness Month in April. There are more than 900 children in foster care in Washoe County, and the overall number of sworn volunteers hovers around 100. That leaves a troubling gap, and the shortage of men - sometimes less than 20 percent of active volunteers - intensifies the challenges.

Volunteers come from all walks of life, fortified by their diversity of personal and career backgrounds. Their mission is advocacy, not mentorship or sponsorship. Their crucial shared qualification is also their shared value: commitment. We know this transcends male-female stereotypes because male CASAs tell us their participation has been among the most profound activities of their lives.

Motivated? We hope you are. The Washoe CASA Foundation, a local nonprofit organization that provides additional funding and support for the Second Judicial District Court CASA Program, has comprehensive information about volunteering on its website (www.washoecasafoundation.com). The foundation also hosts "Coffee with CASA" gatherings where you can get questions answered in person. We look forward to hearing from you.

Feb. 26th, 2018 - Thank you to Washoe County for capturing the unique history of the SJDC courthouse in the attached video. 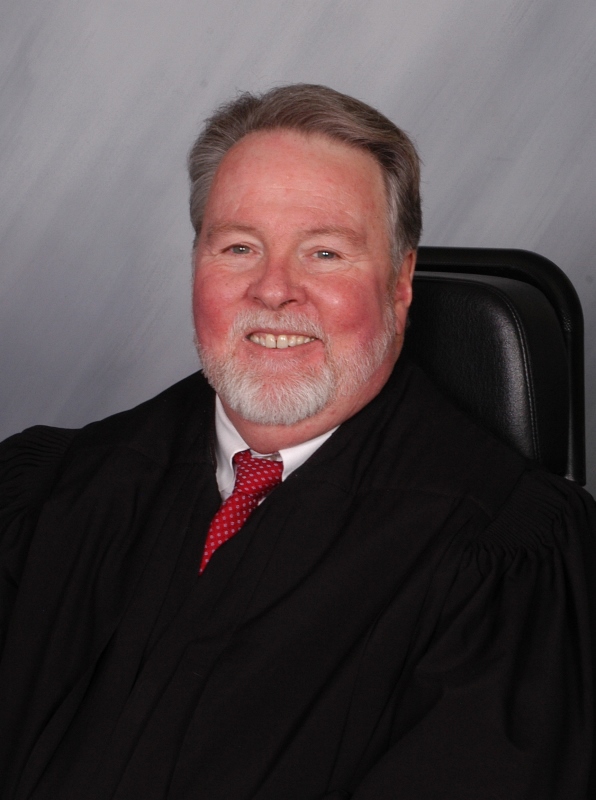 Chief Judge Flanagan was a compassionate and dedicated leader in the Court, the attorney bar, and in the community. He served as the president of the State Bar of Nevada, the Washoe County Bar Association, and the Nevada Chapter of the Federal Bar Association. In addition to his administrative duties as Chief Judge, Judge Flanagan sought to improve pro bono efforts, supported specialty court programs, and focused on providing access to justice for those in need of legal assistance. He also had a passion for inspiring and educating our youth. He regularly spoke to students, opened his courtroom to observation and engaged students in public outreach initiatives, including the Court's first annual student Flag Day poem contest.

Chief Judge Flanagan also had a passion for the legal system and its role in our community. Under his leadership, the Court welcomed the community to participate in a variety of court events and trainings.

"In addition to his judicial wisdom, Chief Judge Flanagan will be remembered for his extraordinary kindness, wit, grace, respect, generosity, and compassion. The loss of his strength and courage as a leader and friend will be felt for a very long time" stated Judge Connie Steinheimer, the longest serving judge at the Court.

Prior to joining the District Court in 2006, Chief Judge Flanagan was a partner at Hale Lane Peek Dennison and Howard, served as an assistant federal public defender for the District of Nevada, and worked in the appellate division of the Washoe County Public Defender's Office as a chief appellate deputy. He received and maintained the highest ratings in the bi-annual judicial surveys during his tenure on the bench.

Chief Judge Flanagan graduated from Duquesne University in Pittsburgh, Pennsylvania with a bachelor's in education, and from California Western School of Law in San Diego, California, where he earned his juris doctorate.

The Supreme Court of Nevada Chief Justice Michael A. Cherry stated: "My most sincere condolences to the family of my friend and colleague Chief Judge Patrick Flanagan. I am extremely sorry that we have lost one of the finest jurists in the history of our state. I will miss his friendship and leadership provided during his long-time service as a lawyer and a judge. May God comfort his family in this time of sorrow and may Patrick rest in peace."

Chief Judge Flanagan is survived by his wife, Caroline, their two children, Erin and Shawn Flanagan, their daughter-in-law, Marianne Flanagan, and one grandchild, William Flanagan.

The Second Judicial District Court recognizes Constitution Day on Friday, September 15th at 12:00 p.m. Celebrate the formation and signing of the U.S. Constitution while honoring citizens in our Community. Click here to see the media release.

On March 24, 2017, the Nevada Supreme Court signed the Order Amending Rule 10 of the Local Rules of Practice for the Second Judicial District Court of the State of Nevada (WDCR 10). Rule 10 of the Local Rules outlines the proper format of pleadings presented to the District Court for filing. As stated in the Order, the revisions reflect statutory and rule changes, supports the transition to mandatory electronic filing, and promotes access to justice by simplifying requirements for document filing. These revisions will become effective on Sunday, April 23, 2017. Click on the below link to view the revised Local Rule 10.

Mar. 28, 2016 - The Northern Nevada Women Lawyers Association and the Washoe County Law Library are pleased to announce a joint Lawyer in the Library event to be held April 13, 2016.

Chief Judge Flanagan promises to focus on providing access to justice for those in need of legal help.

He is a graduate of Duquesne University in Pittsburgh, PA, and California Western School of Law. He is the past president of the State Bar of Nevada, the Washoe County Bar Association and the Nevada Chapter of the Federal Bar Association.

Prior to his election in 2006, Chief Judge Flanagan was a partner at Hale Lane Peek Dennison and Howard and served as an assistant federal public defender for the District of Nevada. He has appeared in every level of state and federal court from Municipal Court to the United States Supreme Court. Chief Judge Flanagan also has received and maintained among the highest ratings in the bi-annual judicial surveys during his tenure on the bench.

In addition to his administrative duties, Chief Judge Flanagan will focus his efforts on improving the District Court's pro bono efforts, supporting the specialty court programs, and providing access to justice for those in need of legal assistance.

The Second Judicial District Court was established in 1910. District courts are courts of general jurisdiction where civil, criminal, family and juvenile cases are decided. The Chief Judge presides over a court with 14 other district court judges, in addition to commissioners, court masters and the Washoe County Law Library/Self-Help Center, as well as a staff of 160 full-time clerks, officers and support personnel.