Payments are accepted 24 hours a day when made online at www.allpaid.com

"Website Search" returns all documents and pages on this site relating to your search term. You may use more than one search term.
Examples: "Department One" or "Divorce with Children".
Do not use quotes in your search.

"Quick Case Search" returns cases that match the Case Number, and/or Case Caption, that you provide.
Partial and multiple values are acceptaple.
Example: Case Number = "CV" AND Case Caption = "Smith"
Do not use quotes in your search.

Each month, the Washoe County Law Library hosts the Lawyer in the Library program. This program offers unrepresented litigants the opportunity to speak with a lawyer regarding legal matters, free of charge. This program is made possible through the volunteer efforts of local attorneys. To recognize those attorneys who participated in June 2022 and July 2022, the District Court acknowledges the below volunteers:

The Second Judicial District Court thanks the Northern Nevada Women Lawyers Association (NNWLA) for sponsoring the Seventh Annual Law Day event held the week of May 2, 2022. This year's theme was "Toward a More Perfect Union: The Constitution on Times of Change." With the assistance of NNWLA volunteer attorneys, 101 community members were able to participate in the program. Please join us in celebrating the below named individuals who helped make this program a success. 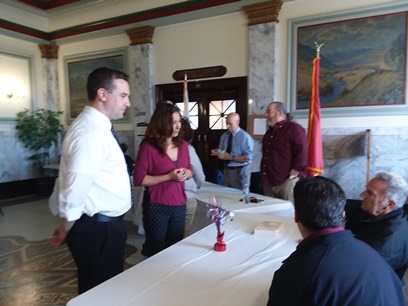 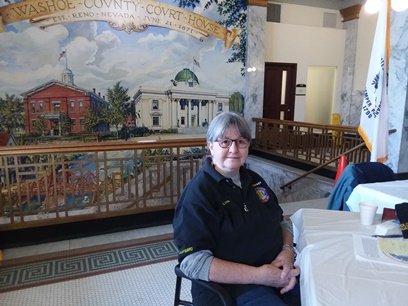 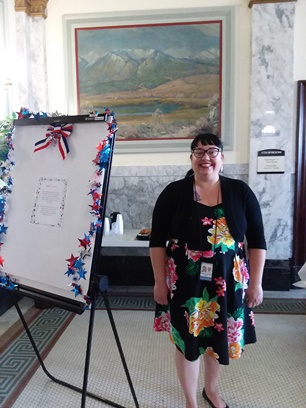 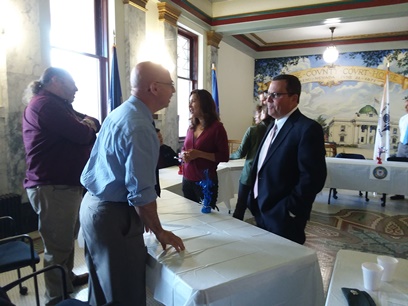 On Friday, August, 26, 2016, Rick Scurry presented the Patriotic Employer Award to two District Court employees during the Town Hall Meeting. The Patriotic Employer Award is a key component of the Employer Support of the Guard and Reserve (ESGR) program of the Department of Defense. This Program promotes cooperation and support between service members and their employers. To support this mission, the ESGR awards the Patriotic Employer Award to individual supervisors who exercise diligent efforts to support their employees who are also service members. The District Court is honored by this award and continues to proudly include members of the National Guard and Reserve among its list of highly-qualified and dedicated employees. 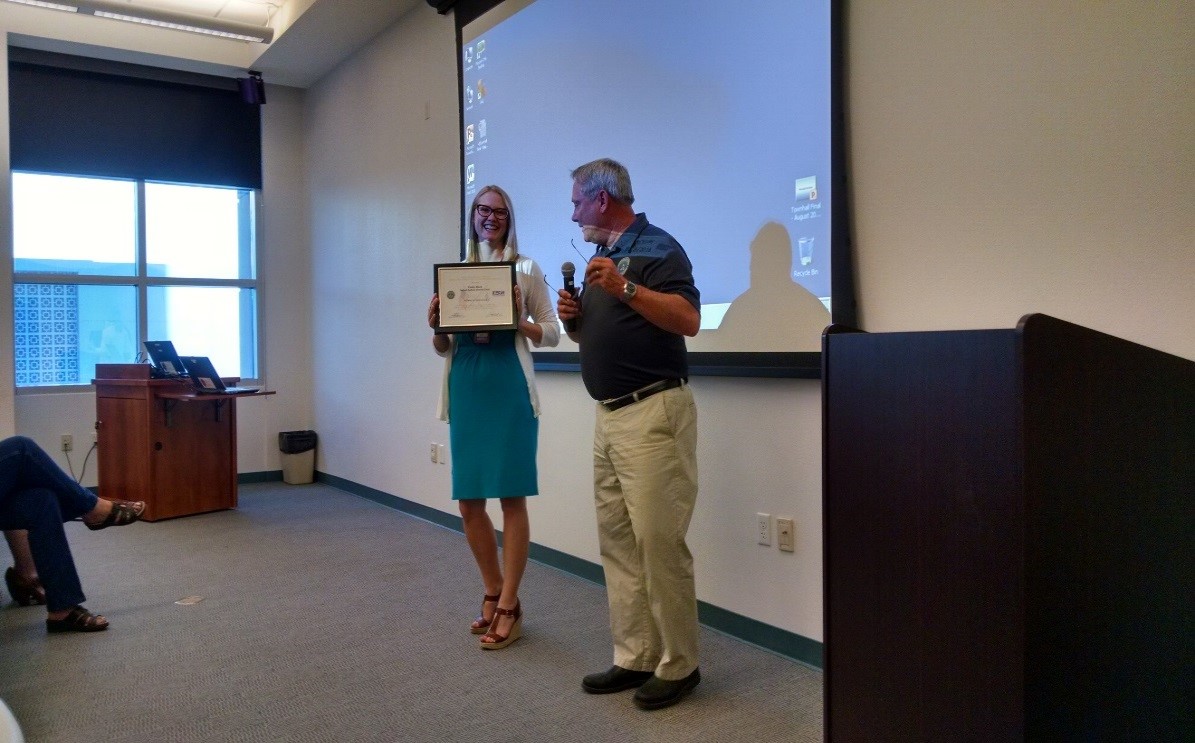 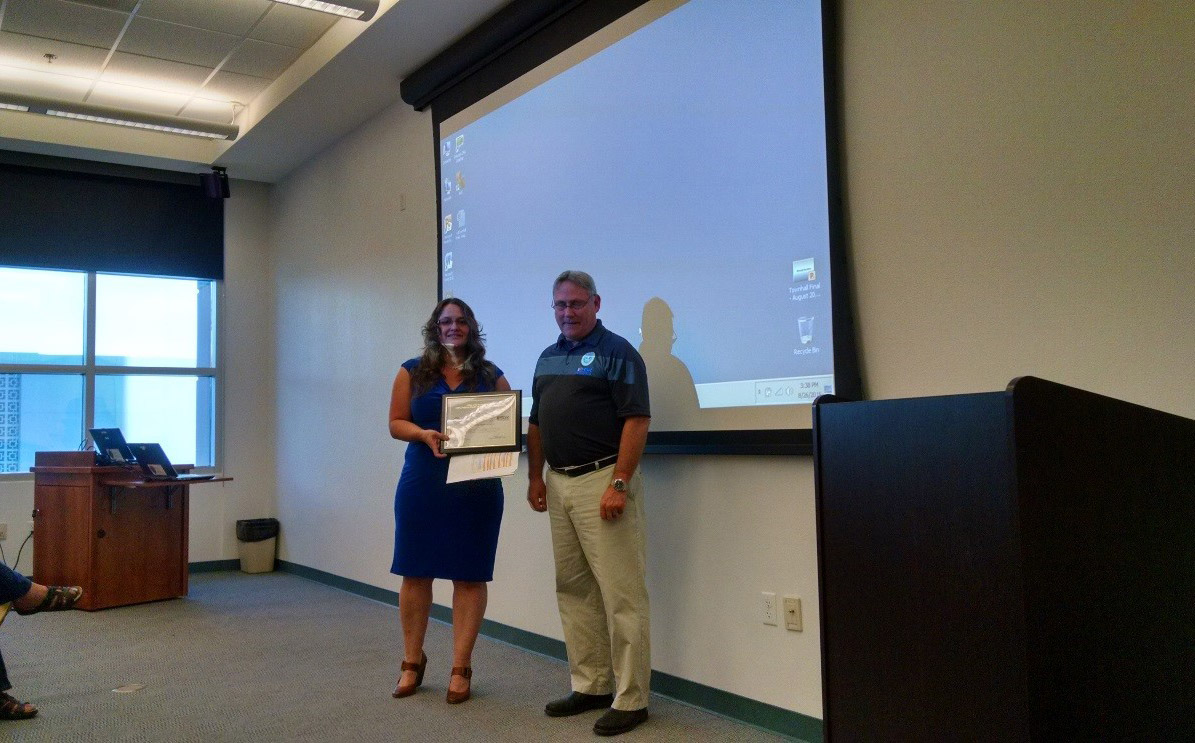 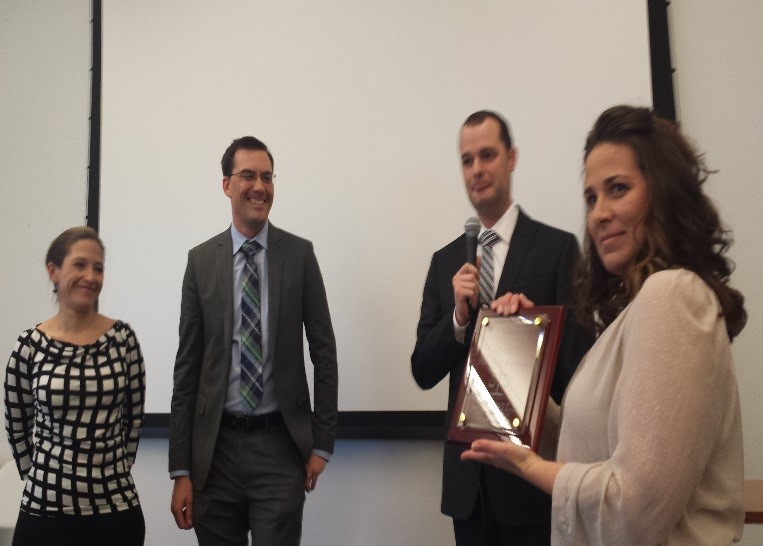 Reno, Nevada, March 28, 2016. The Nevada Association of Court Executives (NACE), a professional organization that promotes quality court management and leadership through education, best practices, and process improvements, named Ms. Heather Condon as its 2015 Court Executive of the Year. Ms. Condon, who is the Pretrial Services Manager at the Second Judicial District Court, received multiple letters of support from the Nevada judiciary for this award.

Mr. Randall Soderquist, Court Administrator for the Municipal and Justice Courts in Elko, Nevada, presented the award. He discussed the statewide reform efforts underway to improve the assessment of pretrial release of those individuals alleged to have committed a crime. Explaining her role in this statewide movement, Mr. Soderquist acknowledged, "Heather has been an integral part."

Supreme Court Justice James W. Hardesty also spoke of Ms. Condon's participation on a statewide Supreme Court Committee aimed at changing pretrial release practices across the State. Justice Hardesty recognized Ms. Condon for her tremendous innovations and suggestions. In May 2016, representatives from the State of Nevada will participate in a Western Regional Conference in New Mexico to discuss the State's initiatives aimed at improving best practices in pretrial release. At Justice Hardesty's invitation, Ms. Condon will also be present. Justice Hardesty explained that "she has not only brought attention and distinction to the Second Judicial District Court, she has brought honor and distinction to the State of Nevada and the Country will recognize her work."

Ms. Condon's family was also present for the ceremony including her husband Lt. Philip Condon and their son.

In collaboration with the Northern Nevada International Center, the Second Judicial District Court welcomed a Japanese delegation to the Family Division on Friday, February 19, 2016. This delegation, consisting of three women, are exploring the topics of child advocacy and parental access during legal proceedings. The Second Judicial District Court was just one of several sites throughout the United States visited by the delegates. Judge Egan Walker, who presides over the Juvenile Court Business Unit, discussed the complex issues that emerge in juvenile dependency and delinquency cases. He also provided an overview of the child welfare system and efforts to enhance the responses to vulnerable children and families. Judge Walker also welcomed the delegation into his courtroom to observe a court docket. 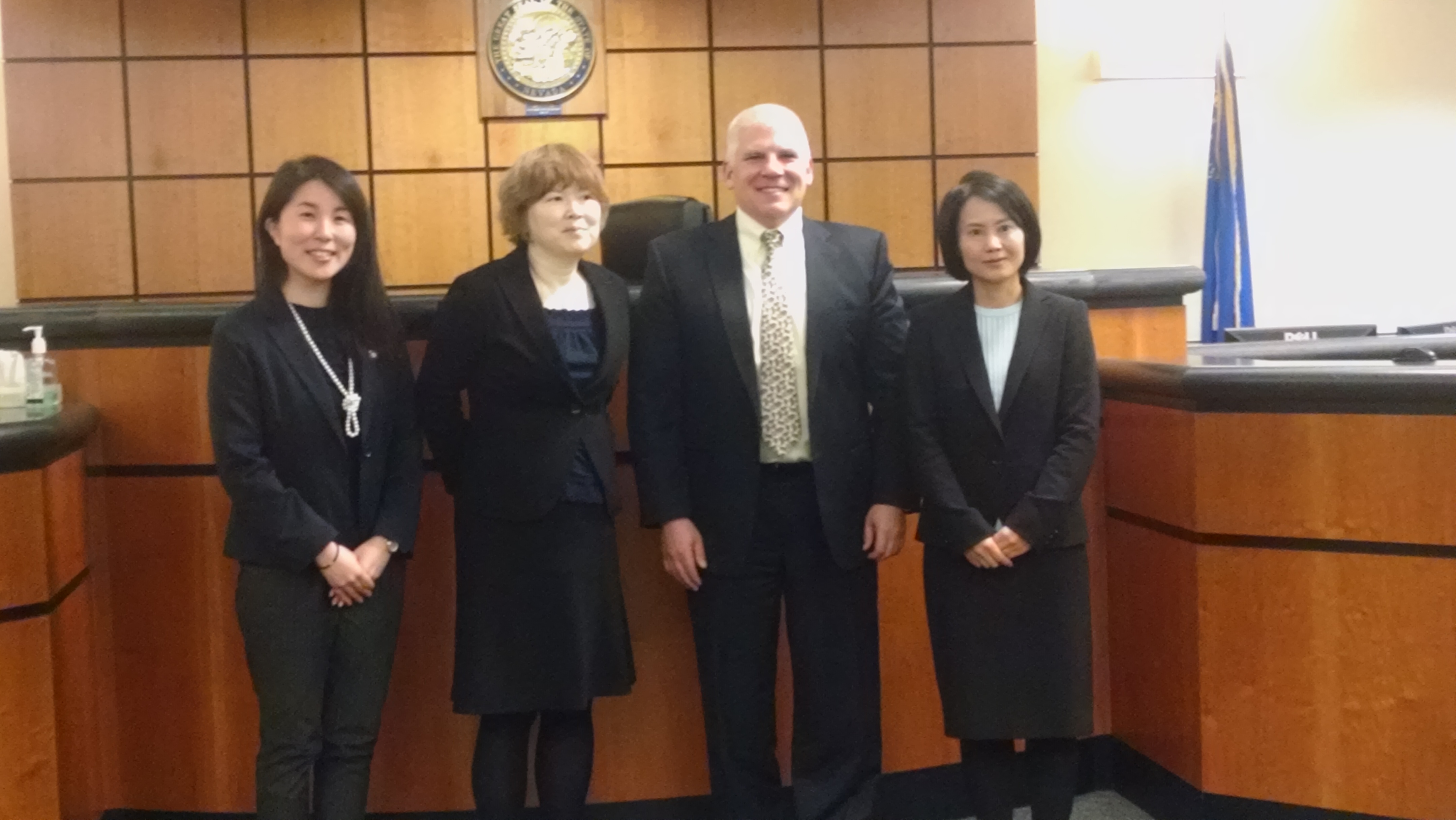 Judge Egan Walker and members of the delegation

In collaboration with the Northern Nevada International Center, the Second Judicial District Court welcomed a Russian delegation to the Family Division on Tuesday, February 9, 2016. This delegation, consisting of six women, are exploring the fields of gender and domestic violence in Russia. Judge Chuck Weller, who provides administrative oversight of the Domestic Violence Business Unit, discussed the complex issues that emerge in family court cases including domestic violence. Judge Weller outlined the resources available to unrepresented litigants, services aimed at strengthening families and forms and packets provided to help individual's navigate through the court system. Master Lance White, who presides over protection order hearings, welcomed the delegation into the courtroom for observation. 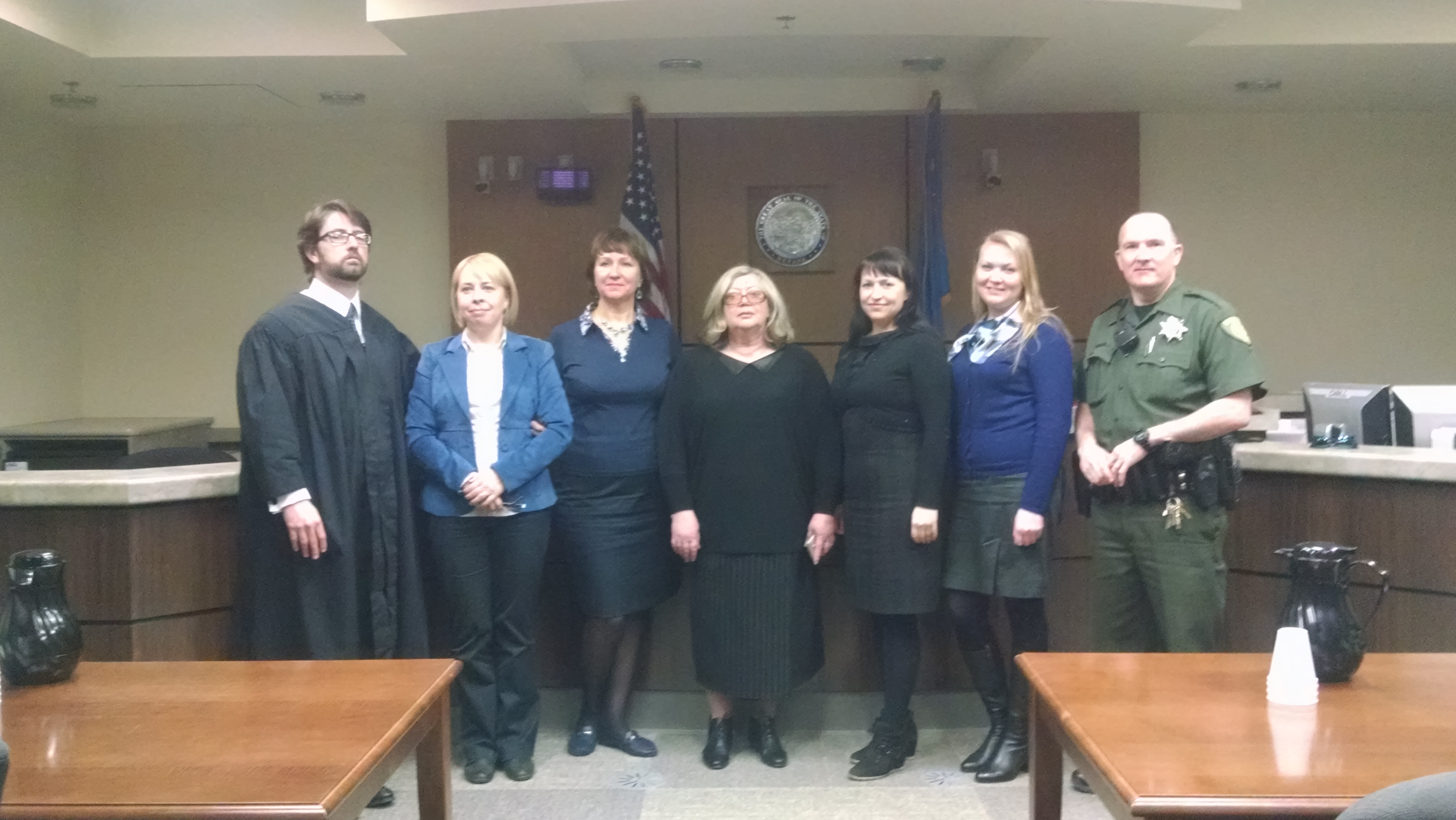 Master Lance White and members of the Russian delegation